6. TO CONNECT ONE’S WILL WITH THE SUPREME WILL (VIDEO, IN ENGLISH ONLY)

Let’s take an example. There is this guy. He hears about karma. And then he accepts it. Okay. And then he starts thinking about his life as it is today, and he is going, “Gee, man, I need to change a lot of things.” Of course, most people are worried about bad karma. I remember when I heard about it I thought, “Uuuh, it doesn’t sound too good”. And so he is thinking about his life and he is thinking about the karma involved and everything and he’s going, “Man, I’ve got so much karma”. Then he realizes, “Even my eating is creating karma”. So he thinks about how to solve that.

He comes up with a very good solution, “I’m gonna become a vegetarian. I’m not gonna eat those cows and pigs, and chickens, and things anymore because when they’re killed, they suffer. I eat their bodies, I’m involved in that whole thing. I get the karma. No, no, no, I’ll be a vegetarian”. And we say great, excellent idea. You will definitely reduce your karma in a big way. It’s good, but it’s not good enough because even though you’re a vegetarian, you still have to kill the carrot. You’ve got to cut the head off the cabbage. He goes, “Oh man, what am I gonna do now?” Back to thinking. “Ah hah, I know, I’ll be a fruitarian. I’ll just eat fruit, because you don’t have to kill the tree”. 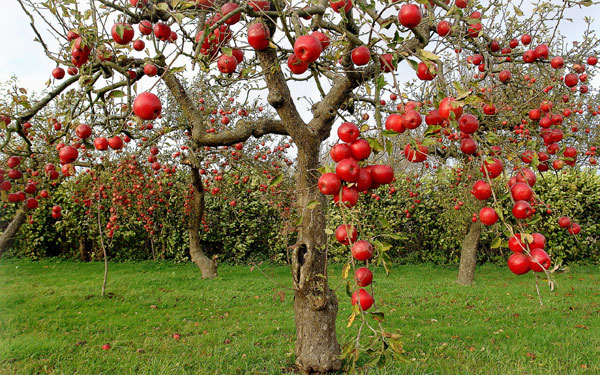 So all this thinking has made him quite hungry. He happens to be sitting beside an apple tree and there is a big apple right there. So he gets ready to pick the apple, and then he stops. “No, no, no, I’m not gonna pick that apple – I might hurt the tree. I’m going to wait until the apple falls to the ground. Then I’ll eat the apple” .So he waits and he waits, he gets very hungry. Finally the apple falls, ka-boom! He rushes over, picks it up and quickly eats it. “Hah, no karma!” But what about all those people he stepped on, on the way over to pick up that apple? What about all the people living on the apple? What about that long guy living in the apple? You see? You can’t avoid karma like this.

In India, there’s a sect known as the Jains. Probably some of you’ve heard of the Jains. And their goal in life is actually to avoid any bad karma. So in their efforts to do so, they wear all-white clothes so if a little bug gets on them, they can gently take it off. They wear masks so they don’t breathe anybody in and hurt them. They sweep the path in front of them as they walk so they don’t step on anybody. They don’t even light fires because they know there are people that live in fire and when you put out the fire, they suffer, you see? I saw a documentary on them one time and their house was full of rats. There was even a rat sitting on this guy’s head. Can’t hurt the rats.

We know that we have a free will, right? ‘Our will be done,’ is the motto of life in the material world. We become the centre of our own universe, and everyone and everything revolves around us. And so that’s the goal: trying to make it so our will is fulfilled. But, of course, it doesn’t always happen. But that’s what we want. Well, the Supreme Person also has a will but His will is Supreme. And His will is always done. Now, as long as I am acting independent of the Supreme Will, I am just acting according to my little will independently, I am responsible for all my actions. And thus the law of karma. But if I connect my will with the Supreme Will, and what I do I do because it is the will of the Supreme, then there is no karma for that activity.

An example. There is a military pilot that flies his warplane over the ‘enemy’ and drops his bombs and those bombs cause so much pain, suffering, hardship and death to so many people. Yet when he returns to the airbase, there’s nobody waiting for him with handcuffs. In fact, if he did a good job, he’s congratulated. But if that same pilot goes into town that night, gets in a fight and kills one person, there is somebody waiting with handcuffs. And immediately he’s taken to jail and he is charged with murder. Now what’s the difference? Here he killed many people, here he killed one. Here he’s congratulated, here he’s incarcerated. The difference is, in the first case he’s acting on the sanction of a higher authority, so he is not responsible. Second case, he’s acting independently, therefore he is fully responsible. So it works exactly like that.

So from the time I begin to perform my activities of life in connection with the will of the Supreme, I create no karma. And not only that, but previous karma from this life and also previous lives is removed. Therefore from that time in my life until the end of the life in this body I create no new karma, all previous karma has been removed and I come to the end of my life with no karma. So one third of the problem solved.

But what about desires and attachments? Let’s look at attachments first. We have so many attachments, you see, and it’s a normal thing. But when we start to connect our will with the Supreme Will, of course this brings us into association with the Supreme Person and therefore a relationship begins to evolve.

There is a young secretary and she graduates from university and gets her first job. And she needs this job. It’s her survival, her rent, her food, her shelter, everything. She must have this job. But she knows she’s not a good secretary. So she is always worried she’ll lose her job. When the boss comes into her little office, she’s very nervous, “Oh no no no…” You see. And she’s actually hoping, “Oh, I hope he doesn’t come in”. And when he goes away on a business trip, she is so happy, “Gee, I hope he stays for a long time”. When he returns, “Oh, no”.

But over time they associate with each other, a relationship begins to develop, and things change a lot. You see? Pretty soon she is telling the boss what to do. They go on a few business lunches together. Hmm, things change even more. They go on a few business trips together, hah, things change a lot. They get to know each other really well, they get involved, they get attached, they fall in love. A wife’s worst nightmare. It wasn’t supposed to happen but it did. It happens all the time. Why? Because of the relationship.

-How about some money?

He is attached to his nonattachment.

And then the third factor was desire. And it’s all perfectly connected. Again this secretary. First her desire was, “I hope he doesn’t come in the office”. But after the attachment and the relationship, “Gee, I hope he comes in soon”. He goes on a business trip. Before it was, “I hope he doesn’t come back”. Now, “Gee, I hope he takes me with him”. You see? “I hope he comes back soon”. And she is always thinking about him. Now she is out of the center and he is in the center. Her life is now revolving around him, “Oh, what lipstick to wear, what perfume, what dress to wear, how should I fix my hair?” Oh, she wants to help him, “I’ll be glad to stay after work. You don’t have to pay me overtime”. It’s about pleasing him. First it was about pleasing herself. Now it’s about pleasing him.

So it’s normal. It’s not an unusual thing. And when that person is the Supreme Lord, the Supreme Person, then that becomes the perfection of life. So now the desire is how to please the Supreme Person, what does He want? What can I do now? What is next? Always thinking like this. Now the universe revolves around Him, not me. And this is how it’s supposed to be.

So we come to the end of our life in our human bodies, which is inevitable, and now we are perfectly set. We’ve now prepared properly. So we have no karma. Great. We have strong spiritual attachment. Perfect. And we have strong spiritual desire to be with the One that we are attached to and that we love. So when we leave the body, then we go directly to the spiritual realm. And we do not come back to the material world. That’s a guarantee. It’s guaranteed by the Lord, “Once one returns to My supreme abode, he never takes birth in the material world again”. So problem solved. But until that point of perfection, we will always take another birth. Wherever it may be, in whatever body it may be, and we’ll always be going through birth, death, old age, disease and all of the things in between. So that’s the only solution.

And the process of yoga… as I said in the beginning, there are many different yoga paths, but the path that brings about this ultimate perfection is called the path of bhakti-yoga. “Bhakti” means devotion, “yoga” means union with the Supreme. A devotional loving union with the Supreme. And then the soul is perfectly situated in its natural condition. And everything is as it should be. So that’s the idea.