5. REINCARNATION IS NOT DESIRABLE (VIDEO, IN ENGLISH ONLY)

Now there are a lot of untruths or misconceptions circulated about reincarnation.

One is, of course, “There’s no such thing. This is not true.” Well, we don’t accept that. It’s not correct.

Number two, “Yes, it’s true, but only for a certain number of lifetimes”. And I’ve heard many numbers, fifteen, twenty-five, one hundred; recently someone said one hundred and eight. The idea being: after twenty-five lifetimes on the wheel of birth and death, going from one body to the next, I automatically get off. My time is up. Twenty-five cycles, and finished. But if we’ve been following this conversation, then after twenty-five lifetimes I still have my material desires, material attachments and material karma, what’s going to get me off the wheel? So that’s not true.

Other people say, “Yes, reincarnation is true, but only among humans”. In other words, once a human, always a human. You started as a human and you’ll continue to be a human. Again that’s not true. What about the hang-glider that becomes the bird? You see all kinds of different life forms. According to the Vedic scriptures, we’ve been in all these different life forms over many, many millions of lifetimes. Now we are in the human body. 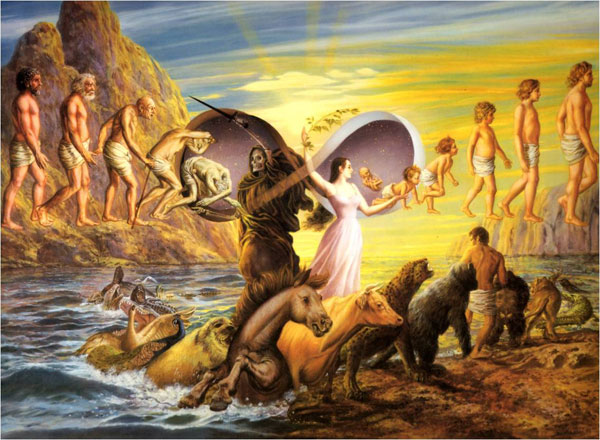 There is a book ‘Reincarnation Explained’ – very complete work on the subject. And I know one boy, he read this and he was so excited, there’s so much information there, that he went home and he showed it to his mother, “Mum, I want you to read this book”. She looked at the title ‘Reincarnation Explained’, she says, “Oh, no. I’m not reading that book. If it’s true I don’t want to know about it”. But what kind of approach is that? We call this the ostrich approach. What does the ostrich do when the enemy comes? He sticks his head in the sand. “There’s no problem, no enemy here”. We don’t consider the ostrich the most intelligent bird. If it is true, we should want to know about it.

We learn from our Vedic teachings that there are two distinct worlds, a material world and a spiritual world. And so it even sounds correct. Spirit soul in the spiritual world. “Hmm, yeah, that sounds right”. But spirit soul in the material world, “Hmm, that doesn’t sound right”. It’s like oil and water. You can put the two together but they never mix. Sometimes we’re referred to as a fish out of water. The fish is an aquatic and its natural home is in the water. So the moment you remove the fish from the water, it begins to suffer. It’s flopping, it’s squirming. Of course, fishermen don’t pay too much attention, “Oh, another flopper”, and they just flick one over there and here… (makes gasping sounds) But the fish is not experiencing a good time. He is gasping, “Uuuuuurgh!”

And you want to help the fish. You go up to him and you say,

– Ahhhhh. How about the restaurant? You know, there’s a nice sea food restaurant right around the corner.

-Let’s go shopping. Shopping always makes you feel better. I’ve got a lot of room on my card. Let’s go.

-How about some ladies? I know many nice ladies. 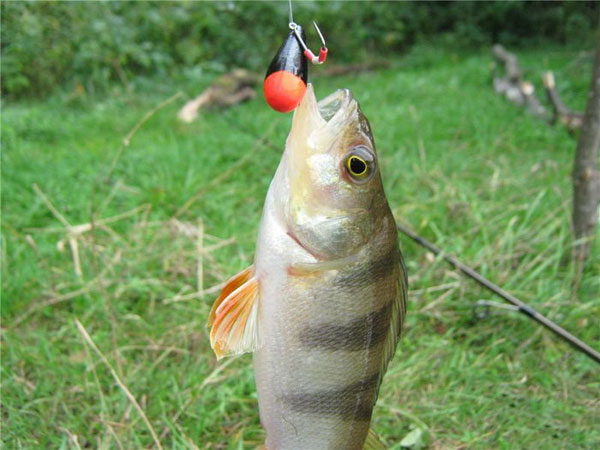 Nothing works. You can’t help this guy except put him back in the water. All problems solved! Finished.

So we’re like that fish, we’re gasping, going through life, “Uuuuuuuurgh!” But we’ve been gasping so long and so does everybody else, it’s normal. We all gasp together and have a nice time. (laughs) But when you learn how it should be, maybe you say, “Hmm, I want to change this”.

You see, most people don’t see all these problems as problems. In the material world we’ve got to deal with birth, disease, old age and death – inevitably so. Now, who sees birth as a problem?

Many people say, “Oh, birth is wonderful”. But for the guy being born it’s not so cool. You know? It describes in the Vedas life in the womb. And it’s a very hellish suffering condition. That’s why the babies are always in there kicking and squirming and, “Let me out of here!” Mama is going, “Oh, my little baby, he’s so nice”. And he is going, “Man, I’m…I’ve got to go”. And then the birth experience itself. You know, he’s shot down this little pipe. And he comes up. Have you ever seen a new born baby? They don’t look like they have such a…

-Aaah, don’t even tell me about it. I don’t want to talk about it.

It was so dynamic we don’t remember it. Anybody remember your birth? Actually, uniquely enough I was giving a lecture in Moscow one time. After the lecture this man came up to me and he said “I do remember my birth. I remember being in the womb, I remember being born, I remember my mom taking me, putting me on her breast”. And I said, “Wow! Can you describe it to me?” And he described it almost word for word exactly like it’s described in the Vedas. So birth is a problem.

And then what? Disease. We don’t like disease. We don’t like to get sick, but inevitably we do. And even a small little thing like a flu or a cold, it’s so uncomfortable, isn’t it? And then if we make it through all of that, what do we come to next? Old age. “Oh, great! Finally I made it. I’ve been waiting all my life for this”. No. Some people call it ‘the golden years.’ That was some young guy that said that. Talk to the old guys, “How is it?” “Oh man, it’s hell”. And then the grand prize of all. Death. The most fearful event of all events.

And then guess what? We get to do it all over again. It’s not supposed to be like this. We’re not supposed to be here. You know, we’re aliens. In America especially, I don’t know, maybe here too, there’s big interest in aliens. Right now in the deserts in Nevada there are people that camp out there, almost basically live there, waiting to see the UFOs and the aliens, you know. “Oh, they’ve got an alien inside 51. The government won’t tell us what he is and what he looks like…”

You want to see an alien? “Yeah, yeah, yeah”. Go look in the mirror. We’re all aliens. We’re not from here. You know, “ET, go home,” if anybody saw the movie. (laughter) “Ooooo yeah, I wanna go home”.