7. STORIES ABOUT REINCARNATION & KIRTAN (VIDEO, IN ENGLISH ONLY)

And most people’s interest in reincarnation, as I said, is sensational. I remember one time, again in Moscow, I gave a different lecture on reincarnation and I was told before the lecture began that in the audience would be an authority on reincarnation. So I go, “Great”, you know? Maybe he’ll learn something. So immediately after the lecture he comes to me and he says… he introduced himself as the authority and he says,

-You know who you were in your last life?

-I was spirit soul. The same as now.

-No, no, no, no. I don’t mean that. I know who I was in my last two lives. Two lifetimes ago I was a great yogi in the Himalayas. The last lifetime I was a very beautiful princess.

I was thinking to myself, “Hmm, you didn’t do too good as a yogi, did you?” (laughter) Sitting in your cave thinking about women. Take birth as a woman. So what? You were this, you were that. You know?

A friend of mine who teaches this philosophy also just met a girl who remembers her last life and how she died. She died as a young girl. Fell off a swing and got killed. Many people remember their past lives. But so what? What does that solve? It doesn’t solve anything. There are so many videos now where people have remembered very, very specific details from their last life that could be verified. And they verify it. The person couldn’t have known it in any other way than to have been there. You can find so much information like this appearing now. So it’s not a question of is it true or is it not true. The question is: what are you going to do about it? Are you going to stay on the wheel or are you going to go back down, probably, to a lower form of life, maybe by chance get a human birth? This is the idea.

Okay, a couple of stories. One is, you know, kind of a common type story. There are so many, like I say. There was a girl, she was born in India. And she remembered her past life from early age, and she was always talking about it. And at first her parents thought it was just childhood fantasy. But she continued to remember and talk and she always wanted them to take her back to the village where she used to live. And so finally they agreed.

And they traveled to the village, and immediately she remembered everything, and she took them to the house where she used to live. They go up and knock on the door. Of course, other people are living there now. And they open the door and they explain to the people, “Oh, this is my daughter and she used to live here in this house in her previous life. Can we come in?”

You can do that in India; no problem. Maybe not here, they will call the blue lights, “Hey…” you know, “We’ve got a problem here”.

So, “Yes, yes, please come in”. So they went in the house and again she remembered everything. She took them to one room and she said, “This was my room”. But she could see that still there was a little skepticism. So she said, “Alright, I’m going to prove it. I buried money under the floor right here”, and she described the container of the money and the amount of money in the container. She said, “Let’s open the floor and if it’s as I say, will you believe me?” and they said, “Yes, we will believe you”. So they opened up the floor and there it was, the container, the money, everything. Of course they believed.

But a story I like the most is because it happened to some friends of mine. I grew up with a girl named Carol. And we were very good friends. We went out together, we did many, many fun things together. But then at one point we went separate ways in life and I didn’t see her for many, many years.

Along the way she got married to a man named Wally. And they were professional people and they were quite well off financially. But they never had any children. However they did have a dog, a big Labrador retriever. And his name was Sergeant. And if you know Labrador retrievers, you know they are water dogs. They really love the water. So Sergeant was like their kid.

And because of their financial situation, they had a vacation home by the sea and every summer they would go there. And early in the morning Wally and Sergeant would take a long walk down the beach. And Wally would throw a stick into the sea and Sergeant would dive in, swim out, get the stick, come back, come up, drop it at Wally’s feet, shake his body, throw water all over Wally. And then they would walk a little further, another stick, another swim, another shake, etc. Until finally they reached a certain point and then they’d turn around and they’d go home.

And this went on for years. But as is inevitable, Sergeant got old and died. And this was a big tragedy, a big loss in the family, because of attachment, you see? They’d lost their kid. So the next time they go down to the sea, things are different.

Wally gets up early, takes his walk, but now he’s feeling very sad. He’s missing Sergeant. He gets to the turnaround place and he starts back, and he notices that along the way there are a school of dolphins, and they are swimming very close to the beach. And this is unusual. They are going at the same speed he’s walking. So he stops and he begins to look. And as he’s looking, one dolphin breaks away and swims straight toward the beach at a high speed. He comes right up on the sand and he stops at Wally’s feet.

He said, “I was shocked”. And he said his first thought was, “Gee, how am I gonna get him back into the ocean?” Then that dolphin looked right in his eyes. And he recognized those eyes. Then the dolphin rolled on his back, shook his body, threw water all over Wally, rolled back over, wriggled back into the ocean, and he was gone.

Wally became very emotional. He goes back, goes in the house, he’s crying, Carol looks at him and says, “What’s wrong with you?” He said, “I just saw Sergeant”. She says, “What do you mean you saw Sergeant?!” and then he told her the story, and she knew he was telling the truth. 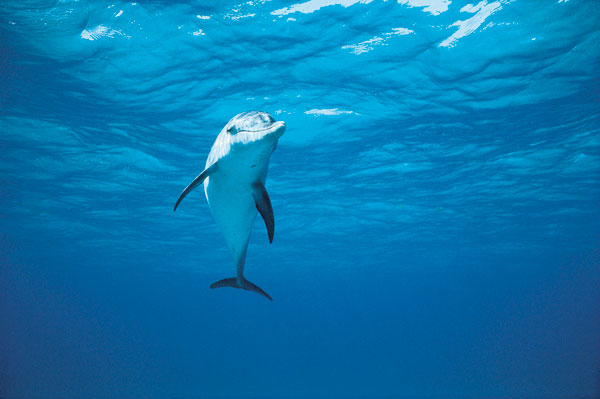 So when I saw them years later, first she told me the story, then he came home and he told me the story. Because they knew what I was into. And he was a radiologist, kind of scientist kind of guy. He told me, “You know, I never believed in any of this stuff before”. He said, “I believe now”. So it’s very real. So we need to think about these things. And do we want to stay on the wheel, do we want to get off, etc.?

So the one activity above all activities that can make our exit the most likely and actually bring us to this stage of success is mantra meditation. This is also declared in the Vedic scripture. These transcendental sounds have an amazing potency that can perform this magic. So again, tomorrow night, we will go into this in detail. But now, if you’ll take your second mantra card, it has two mantras on it.

HARIBOL NITAI GAUR, NITAI GAUR HARIBOL and GOPALA GOVINDA RAMA MADANA-MOHANA. As before, we are going to chant the mantras. But we’ll say them first so you can get the pronunciation correct. First I say the mantra, then you respond. Okay? Everybody ready? Haribol, everybody.

Great. Now the process is easy. You already know how to do it. It’s called singing. Everybody knows how to sing. So we’re going to sing the mantras. Don’t be worried about the quality of your singing voice. This is not a talent show, this is meditation. So just relax, sing out loud, I’m going to play a guitar to make it easy to follow along. And meditate on the sound. Okay? So you have to sing loud so I can hear you. I have a microphone, I have the advantage. But you have the number advantage. So it should work out even.

Okay, thank you very much. So I thank you for coming tonight. It’s been a very nice evening for me. Nice attentive audience, thank you.

And in the back we have some refreshments, if you didn’t see them coming in. We also have some booklets and mantras recorded on disk. So be sure to visit our table. This is our schedule of different lectures here in Norway, so you have it in your package. You’ll know where things are going on. And also contact numbers here at the bottom. There are ongoing programs in Oslo, so there is the contact information. Okay, once again thank you very much and Haribol.