The Supreme Person is known as the Supreme Personality of Godhead. In common everyday language in the world this is known as God. The word God is somewhat disliked by many people, “Oh, this is religion. Are you going to talk about God? I thought this was yoga!” Yoga is the perfect religion. There is only one religion and that is union with God. 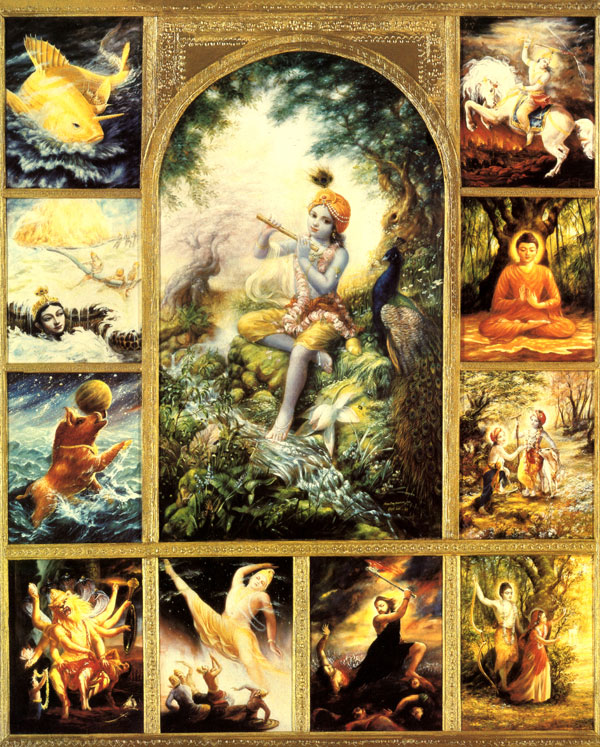 The Supreme Lord is unlimited. He created everything that exists including ourselves. And He has potencies that are inconceivable. In other words, He can do anything that He wants. His will is Supreme. So one of the things that He does: He expands Himself into many other forms. So there is the original form and then many expansions. The different expansions perform different functions.

In this material body, which is not ourself, we reside. We are the life force, we have just talked about this. Here we are, the little spiritual personality inside the body. But also residing within the body is the Paramatma, our constant companion. No matter where we go, He is always with us. But we are not aware of that, we are not conscious of that, we have become separated. So He is very close but very far away.

Also we, the little spirit souls, have an effulgence. It is called an aura. Maybe some of you have heard of an aura. We give off a little light, too. And now people have developed the way to photograph this aura, “Take a picture and see how much effulgence you’re giving off.” People get very proud if they have big aura. You have your picture and you take it, “Oh, look at this!” But if your aura is little, not much light, you don’t show anybody your picture, keep it to yourself. But the point is the Supreme Lord has this huge aura known as the Brahmajyoti.

So these are the three aspects of the Absolute Truth. Bhagavan, Paramatma and Brahman. And the yoga paths are designed to take us, the individual souls, back to one of these three destinations. They are all spiritual, they are all transcendental.